Furious sound of crackers, hazardous gases and chemical particles of fireworks engulfed the night of the Kali Puja and Diwali in the City of Joy. Consciousness was defeated  yesterday by demonic joy of many oblivious of the effects of crackers and fireworks. Diwali night in Kolkata had been turned into a night of horror. Many householders shut windows and doors, streets were half-empty and even street dogs took shelters to avoid impact of fireworks and high decibel crackers. 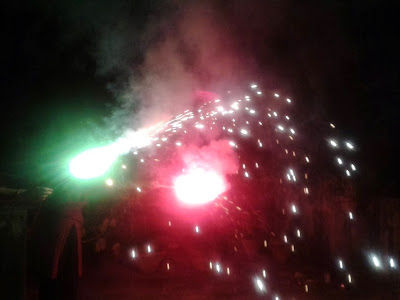 As per measurements of pollution experts in some parts of the city on 3rd November, the existing pollution has increased considerably during the Kali Puja night. Dust particles in air is measured 7 times above normal, lead 10 times, aluminium 5 times, cadmium 13 times and cobalt 65 times.

In the context of sound and air pollution South Kolkata was ahead of its' northern counterpart. However, the frenzied dance of sound was most in some areas of Salt Lake, Burrabazar and within the Government hospital compounds of Nil Ratan Sarkar, P.G and M.R.Bangur, a report says. Hospital staff living the compounds and enjoying the crackers did not care for hundreds of hospitalized patients.

According to doctors different dermatological problems, breathing and heart related problems, allergic reactions, hearing problems and host of other diseases are bound to be created or enhanced by the alarming increase in the tradition of high decibel crackers and chemical based fireworks.

Sustained campaign for pollution- free Diwali and strong measures of state Pollution Control Board against offenders are absent.

Update : Meanwhile on Saturday night a local gang, at Ashoknagar of North 24 Pargana district in Bengal, killed Pintoo Biswas who protested against bursting of crackers in the locality to ensure relief to an old  sick man. Another physically challenged youth was brutally beaten up and had to be hospitalized and his wheel chair was smashed near Charu Market Police Station in Kolkata for same reason on Saturday. Manhandling of protesters, including women, is continuing even in day-time in the last two days in Kolkata.
Posted by Anonymous at 09:26