A 41-year-old policeman from the Pacific Island of Maiana found himself lost at sea with his brother-in-law, in what was supposed to be a two-hour boat ride. The two men -- 41-year-old Toakai Teitoi and 52-year-old Lelu Falaile -- started on May 27 with intentions of boating from Kiribati to Maiana. They stopped to fish along the way, slept overnight and awoke in the morning to find they had drifted out of sight of Maiana and were out of fuel. They had food, but no water. Without water or rescue, Falaile's health failed and he died on July 4.

Teitoi buried his brother at sea and the very next day, a rainstorm that lasted several days allowed Teitoi to fill two 5-gallon containers with water. But weeks continued without incident or rescue. And then on Sept. 11, Teitoi was curled up in the shade under a covered area in the bow of the boat, when he heard a scratching sound on the hull. A shark was bumping against the boat. When the shark had Teitoi's attention, it swam off.

"He was guiding me to a fishing boat. I looked up and there was the stern of a ship and I could see crew with binoculars looking at me," Teitoi said.

The ruling Japanese government party today approved a policy to phase out nuclear power by the 2030s, a dramatic shift expected to drive demand for efficiency and renewable energy. The plan formalizes Japan’s departure from nuclear power last year in the wake of the disaster at the Fukushima nuclear power station where all but two power stations were shut down for safety checks. As in Germany and Switzerland, public opinion in Japan has turned firmly against atomic energy, which led to today’s decision. Japan’s remaining 50 nuclear reactors will operate until their planned 40-year lifetime but then be shut down, with the latest projected for the mid-2030s. The country intends to keep fossil fuel use at roughly current levels while tripling renewable energy’s share and increasing energy efficiency.
Posted by Anonymous at 07:58

In the end he didn't have to wear a beak, but Vladimir Putin did don white overalls and big black goggles as he took to the skies over northern Siberia in a motorized hang glider to help endangered cranes begin their migration to wintering grounds in Iran and India.

Putin, who is a few days short of his 60th birthday, has spent about a year and a half preparing for the trip with the cranes and received 17 hours of advance training on the motorized hang glider.

Wednesday's flight took place in Russia's far north, by the banks of the Siberian river Ob, at the site of a project that rears cranes in their traditional nesting grounds. The birds have almost been driven to extinction by hunters targeting them along their migration routes through central Asia.

After his flight Putin donated the hang glider, which his press spokesman said he had purchased with his own money, to the crane conservation project and shared fish soup and tea prepared over a campfire with the scientists working there, the state-owned paper Rossisskaya Gazeta reported.

Putin followed his close encounter with birds with a close encounter with sea life. On his arrival on Thursday at the Asia Pacific Economic Forum in Vladivostok, which Russia is hosting, he visited a new aquarium in the city. Staff pulled an octopus out of its tank, which Putin proceeded to stroke, Interfax reported.

The cranes will now remain under the supervision of the presidential administration, which already cultivates Putin's nature-loving credentials by assisting schemes dedicated to preserving polar bears, tigers, leopards, and whales in Russia.

Cristina Sanchez, a young biologist at Complutense University in Madrid, was studying cell metabolism when she noticed something peculiar. She had been screening brain cancer cells because they grow faster than normal cell lines and thus are useful for research purposes. But the cancer cells died each time they were exposed to tetrahydrocannabinol (THC), the principal psychoactive ingredient of marijuana. In 1998, she reported in a European biochemistry journal that THC “induces apoptosis [cell death] in C6 glioma cells,” an aggressive form of brain cancer.


A team of Spanish scientists led by Manuel Guzman conducted the first clinical trial assessing the antitumoral action of THC on human beings. Guzman administered pure THC via a catheter into the tumors of nine hospitalized patients with glioblastoma, who had failed to respond to standard brain-cancer therapies. The results were published in 2006 in the British Journal of Pharmacology: THC treatment was associated with significantly reduced tumor cell proliferation in every test subject.

Around the same time, Harvard University scientists reported that THC slows tumor growth in common lung cancer and “significantly reduces the ability of the cancer to spread.” What’s more, like a heat-seeking missile, THC selectively targets and destroys tumor cells while leaving healthy cells unscathed. Conventional chemotherapy drugs, by contrast, are highly toxic; they indiscriminately damage the brain and body.

Dr. Sean McAllister, a scientist at the Pacific Medical Center in San Francisco, has been studying cannabinoid compounds for 10 years in a quest to develop new therapeutic interventions for various cancers. Backed by grants from the National Institute of Health (and with a license from the DEA), McAllister discovered that cannabidiol (CBD), a nonpsychoactive component of the marijuana plant, is a potent inhibitor of breast cancer cell proliferation, metastasis, and tumor growth.

In 2007, McAllister published a detailed account of how cannabidiol kills breast cancer cells and destroys malignant tumors by switching off expression of the ID-1 gene, a protein that appears to play a major role as a cancer cell conductor.

“Cannabidiol offers hope of a non-toxic therapy that could treat aggressive forms of cancer without any of the painful side effects of chemotherapy,” says McAllister, who is seeking support to conduct clinical trials with the marijuana compound on breast cancer patients.

Most Iconic Scientists of History, Together

Originally captured in 1927 at the fifth Solvay Conference, one of the most star-studded meetings of scientific minds in history, the photo shows notable attendees including Albert Einstein, Niels Bohr, Marie Curie, Erwin Schrödinger, Werner Heisenberg, Wolfgang Pauli, Paul Dirac, Madame Curie and Louis de Broglie — to name a few. Of the 29 scientists in attendance (the majority of whom contributed to the fields of physics and chemistry), over half of them were, or would would go to become, Nobel laureates.
Posted by Anonymous at 08:47

In a landmark verdict against Sahara India Pariwar, the decade long sponsor of Indian national Cricket team, Supreme Court of India has ordered the company to return Rs. 17,400 crore with 15% interest to its millions of common investors. In the 263 pages long verdict Supreme Court of India has directed that a total sum of around Rs. 24,000 core is to be returned to public from which the money was collected for two Sahara group companies...

The complete Supreme Court verdict can be read here.

In response to this blow, today, on 2nd September, 2012, Sahara India Pariwar has come up with a page long advertisement in different newspapers across India. 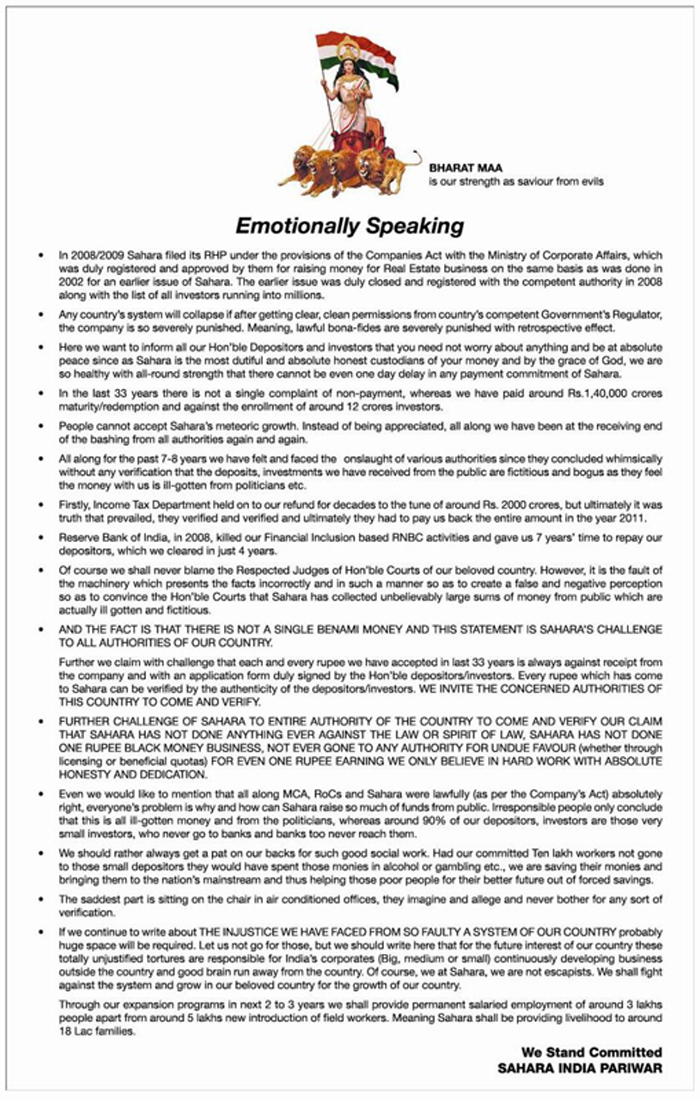