The latest breakthrough in the field of medicine and science is the prestigious Nobel Prize in medicine grabbed by Sir John Gurdon and Dr. Shinya Yamanaka. Shinya Yamanaka, a Japanese physician and researcher of adult stem cells, is a stem cell pioneer and his work singles out every other scientific wave. In 2007, he discovered a way to induce ordinary(somatic) body cells into pluripotent embryo-like stem cells dubbed "induced pluripotent stem cells(iPSCs)".

According to Shinya Yamanaka's article in Nature(June 7,2007) his discovery is completely guided by moral concerns excluding any lethal experiment on embryos. In the words of Shinya Yamanaka- "When I saw the embryo, I suddenly realized there was such a small difference between it and my daughter." Neither he used eggs nor embryos for research purpose, rather he used mice.

Recent news regarding research has always hyped human embryonic stem cell research(hESCR) owing to which the American President Barack Obama had even banned the use of human embryos to develop regenerative power and cure.

Shinya Yamanaka, the budding scientist, has proved loyal to Hippocrates saying:- "As to diseases, make a habit of two things-to help, or at least to do no harm". He makes the medical community of scientists understand that stem cell research is not only about therapies and quick cures, it's understanding the basic nature of human cells and that's what he truly owes his success to.
Posted by Anonymous at 02:41 No comments:

"Just because its legal doesn't mean it is safe". Negligence to this very fact shows that annihilation is in the air, it is upon us. In spite of laying down 9 Scots in hospital beds, its online demand and marketing continues. Such is the perpetual in reserve knowledge of the street chemists about drug that every-time the law cracks down on an intoxicant, a new strain pops up to compensate its loss.

The latest of these "legal highs" called "Annihilation" has been prohibited in the UK after hospitalizing 9 people in the past 3 months. But how can a person taking a drug called 'annihilation' expect sympathy for hospitalization?

Prof. Les Iversen, the chairman of the British government's Advisory Council on the Misuse of Drugs(ACMD), said-"It is an example of how fast moving this field is".

Scientifically, this new synthetic drug which is a principle imitant of marijuana has the potential to cause paranoia, aggression, accelerated heart rate, unconsciousness and numbness.

The ban on this drug is hoped to clear off the dark clouds in the warped world of new psycho-substances.
Posted by Anonymous at 10:02 No comments:

Felix Baumgartner (@FelixBaumgart), a skydiver and commercial helicopter pilot from Salzburg, Austria has jumped from Stratosphere and broke the speed barrier of sound before reaching earth. 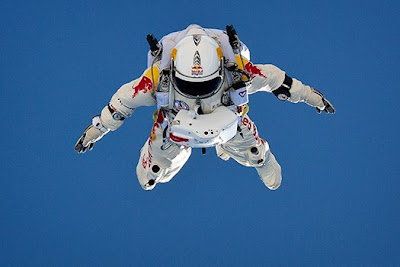 Congratulations to Felix Baumgartner and @redbullstratos on a record-breaking leap from the edge of space! redbullstratos.com/live #livejump
— NASA (@NASA) October 14, 2012

"One of the most exciting moments was standing out on top of the world, 30 seconds before stepping off." Felix Baumgartner
— Red Bull Stratos (@RedBullStratos) October 14, 2012

Marijuana’s moment finally seems to be here. At Hempfest in Seattle last month more than 100,000 fans rallied for the one-time evil weed. The governor of New York State and the mayor of Chicago recently supported the repeal of criminal penalties against a personal stash. And next month, if current polls hold, voters in Colorado and Washington will approve historic measures that make the pot nearly as legal as heirloom tomatoes. “This is clearly the tipping point,” says Keith Stroup, the grand old soul of the legalization movement. “We are in the process of ending marijuana prohibition in America".
Posted by Anonymous at 07:51